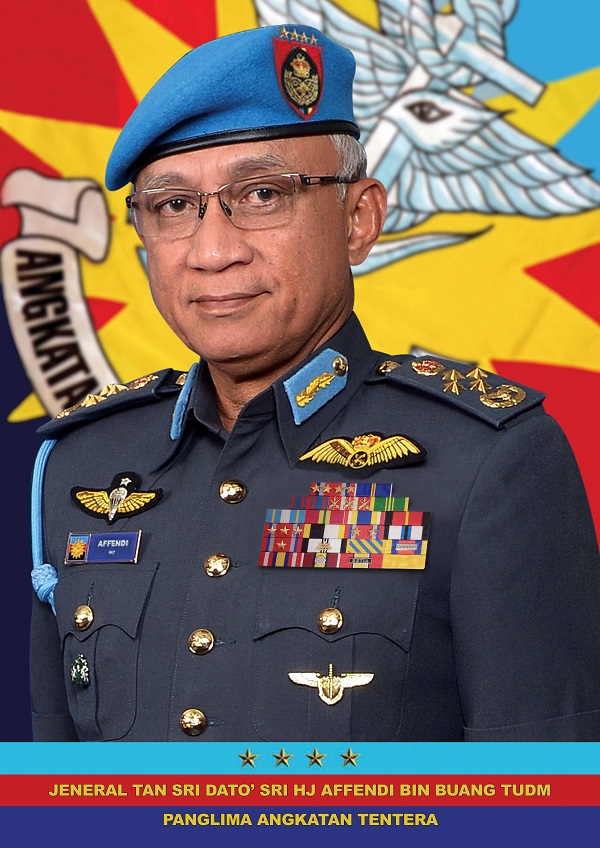 General Tan Sri Dato’ Sri Hj Affendi bin Buang RMAF is the Malaysian 21st Chief of Defence Force. Born in Kuching, Sarawak on 21 August 1962, he joined the Royal Malaysian Air Force (RMAF) in 1980 after the completion of his studies in Royal Military College (RMC), Sungai Besi. Upon being commissioned as a 2nd Lieutenant and awarded his flying wings in 1982, General Tan Sri Affendi’s career as a fighter pilot took off with more than 2000 hours of flying experience in the MB339A, A4-PTM Skyhawk and MiG-29 Fulcrum. Throughout his operational tours, General Tan Sri Affendi was actively involved in various air operations in Malaysia including countering the communist insurgency, patrolling the maritime zones and airspaces of Malaysia as well as being one of the founding members of the RMAF Mig-29 tactical aerobatics team popularly known as the Smokey Bandits.

General Tan Sri Affendi has served in various staff and command positions at the tactical, operational and strategic levels. Among the key appointments held were Commander of Joint Force Headquarters, RMAF Air Operations Commander, Deputy Chief of Air Force after which he became the 18th Chief of Air Force on 20 December 2016. On 2 January 2020, Gen Tan Sri Affendi reached the pinnacle of his military career when he assumed command as the 21st Chief of Defence Force.

As a proponent of lifelong learning and believing in the importance of gaining knowledge as a part of increasing competency and proficiency, General Tan Sri Affendi has attended various career progression and academic courses at both local and international establishments. He holds a Master of Arts (Strategic Studies) from Deakin University, Australia and is also an alumnus of the Royal College of Defence Studies (RCDS), United Kingdom.

In recognition of his outstanding bravery during the communist insurgency, Gen Tan Sri Affendi was bestowed the Air Force Medal (PTU). Apart from the Air Force Medal, he has also been conferred several medals and awards by the Federal and State Governments as well as from neighbouring countries for his outstanding contribution to the nation and this region. The most notable ones are the Panglima Gagah Angkatan Tentera (PGAT) and the Panglima Mangku Negara (PMN), which was conferred by the Duli Yang Maha Mulia Seri Paduka Baginda Yang di-Pertuan Agong that carries the honorific title Tan Sri. His latest was the conferment of Singapore’s military awards, Darjah Utama Bakti Cemerlang (Tentera) by the Government of Singapore.